It is a well known fact that members of the Midwest Garrison and the 501st as a whole, are always willing to open their hearts and wallets when they are asked.

Today, we opened something a little different. We opened a vein and donated blood as part of the current Legionwide Charity Challenge.

Donating blood is truly the gift of life. Blood is not something that can be made in a factory, but only comes from us. Especially with the two recent earthquakes and the summer season (which seems to always demand more blood) upon us, the need has been a little greater.

I contacted LifeSource at the end of March to see if we could sponsor a Blood donation day and they were excited to work with us. Flyers and e-mails were mailed letting Star Wars fans in the South Suburban area know that we would be at their Orland Park facility on May 22, 2010 from 9:00 AM to 1:00 PM.

Huge crowds were not expected as donating blood is probably not on everyone's list of favorite things to do. The day brought a stead stream of donors to the facility and I will always remember the one gentleman who wanted his photo take with R2-D2.

Our donors for today (we made sure they were cheered on)

Rudy Grasha - BH3620 - Boba Fett who did a procedure that is actually like donating two pints of blood as the pint is removed...part of the blood stays removed. The fluids are put back into the person - and then another pint is removed again.

We spent time inside the facility...

and out near the street - hoping to attract a little more attention...

I gave O'Brien a small certificate of thanks for the advertising and facilities that they shared with us.

All of the other ladies who were working today were saints for putting up with us. Sadly, when I went in to see if any of them would like to take a photo with us as we wrapped up - they were all busy with patients...so...I guess in a way...that is a good thing.

THANKS AGAIN TO ALL OF OUR PARTICIPANTS!!

Remember too that all MWG members can add to our blood counts by making an appointment and donating at ANY facility, wear a 501st T-Shirt and have someone take your photo as you donate.

More photos....
and....I am sure there will be lots more additions to the cache of photos..

I had amazing time, thank you for the privilige of letting me troop in my new TK!! My mom also enjoyed herself a lot, and it was a lot of fun!

Here are my pics,

GREAT event, GREAT FUN!! Thanks for putting all this together, Phyllis! ANd thank you for beautiful armband!

Here are my pics:

Thanks Phyllis, Fun troop as always. Great photos everyone!

“It's always a Pleasure to Meet a Jedi”
Top

Its was a lot of fun great time
MWG comic relief

I want to mimic my fellow troopers sentiments above.

Thank you for putting this together Phyllis!

-River
TROOP! For a cause. What do YOU troop for?
Top

We had a great time as usual.The manager mentioned that he would like to do this again.I'm all for it.I'll try not to bust my bucket next time.

I received this update from O'Brien last night...

Thanks to you and the whole Star Wars Crew! You guys presence was so well received and because of it, we got 25 units of blood yesterday! You guys are awesome and I look forward to working with you again in the near future.

Also, I would like to thank you for the certificate.

It's always nice to get some positive feedback.
Top

Thanks to you and the whole Star Wars Crew! You guys presence was so well received and because of it, we got 25 units of blood yesterday! You guys are awesome and I look forward to working with you again in the near future.

Also, I would like to thank you for the certificate.


WOW!! That's fantastic!!!! 25 pints is a lot...and it does save lives...my oldest daughter owes her life to someone for the three pints of blood she recieved 2 years ago last week that saved her life..she was slowly bleeding to death from a bleeding disorder we have, and that three pints saved her life...if we had waited one more day she might not be here.

GReat job every one!!! I wish I could donate but due to the bleeding disorder I can't....but I'm glad you guys could!

I hope every one had a snack and some orange juice after that!

That's awesome!!!!!!!!!! I'm getting happy tears right now! I was so busy that day, my wife and I woke up early, and we were runnning, and cleaning, and preparing until around midnight, for my step daughters graduation from High School (and my birthday) on May 23rd, so I couldn't make it to the event. I will donate a pint though, for all those who donated for this event!
"Open the blast doors, Open the Blast doors!"
Top

score another pint...
the ladies were really busy when I went in today...so I just scanned this rather than asking them to take a photo..

egad...
my blood pressure was really high for me...
but ..
I shouldn't be surprised..
I went there straight from that 4 letter word...
work..

Anyone who attended this event is eligible to donate again...
IF you decide to donate before 7-31

make sure to post a photo here of you donating again...
or a scan of your "receipt"....

"We are the music makers, and we are the dreamers of dreams".
Top

please read carefully....
and let me know if participants of this event are interested in this...
and how many you would be interested in...

I did mention that at this time...
there is a lot of focus on CV...
so that I don't expect a huge response...

but...
running it up the flagpole...
see who salutes..

I'd like to start an interest thread for a patch to commemorate our 2010 Blood Drive. I think it would be best to make this exclusive to people that either donated, trooped, or somehow participated in the challenge. Also, if this does go through like that, I'd like to have the Charity Reps (you) be the single points of contact for sales to Garrisons and Squads, to make it easier on myself (this would be my first time trying this).

So post here what kinds of numbers your unit would likely want to purchase. I supposed we could open it up in a limited fashion to the Legion to get the numbers we need, and am willing to take recommendations from anyone with experience on this. 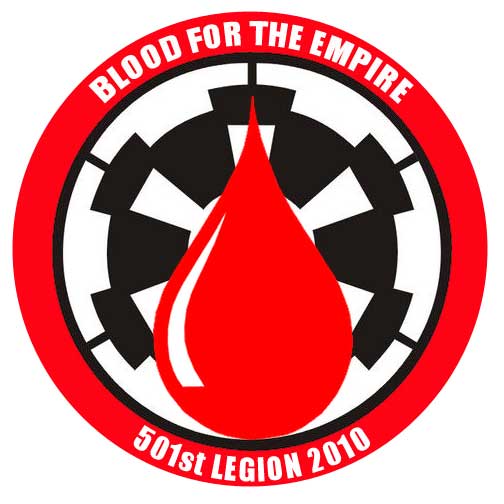 and those who were not able to troop this event...
or, like Barry donated on their own..
and would like to be eligible to purchase a patch...


you still have a couple days to make an appointment to donate blood locally...
the challenge ends on Saturday...

Midwest Garrison came in 3rd Place in this Charity Challenge..


Thanks to all who donated!