* 09/01/17 IL Plainfield - Force Friday - The Wandering Dragon Game Shoppe
Comments: We were asked if we were able to appear for Force Friday at Wandering Dragon during the conversation I was having with them about Wizard World. The game shop had never done anything like this before, but because they have Star Wars game groups, they thought it would be cool to bring us in for Force Friday II. WDGS offered to give a donation to any charity we had in mind, we basically said whatever their favorite charity was, but mentioned we did a lot of work with pediatric cancer research (and September was the push month for them). Update 9/19: Received a message from Kevin and Laura that they donated $100 to Red Cross, which was matched through another organization making it $200, for the Red Cross Hurricane Relief. I thought that worked out well too, since we also had troopers in the Legion who were affected by both hurricanes, so it might go to help them a little as well.

The troop went well. The gamers did seem more focused on their gaming, only pausing briefly to take a few photos with us. We had better success roaming the streets outside of the shop, and Lockport St, where we garnered interest in The Wandering Dragon, Star Wars, and it being Force Friday. The Shoppe was more than pleased with our presence, and would love for us to come out to any one of their Star Wars game nights once again. They hope something can be arranged. 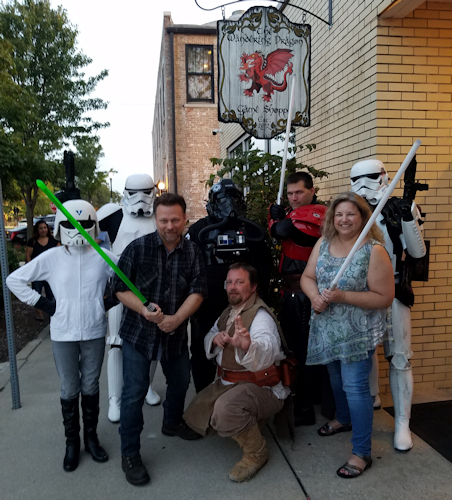