Summaries and descriptions of past events.

* 02/29/20 IL Oakbrook – Curve Ball 2020 Comments: We were contact for an appearance by the charity organization One for the Kids for their largest annual event Curve Ball. This is an formal gala banquet, including raffles, auctions and entertainment, with all proceeds going to the beneficiary family of the year. We were requested to be a part of this year’s festivities, due to our relationship with the Chicago Steel Hockey Team and Agency360 which organizes their promotions.

This year’s beneficiary family is that of Gavin Cerney, a 9 year old boy who was born with severe autism, epilepsy and ataxia. Gavin has a rare form of autism, which has completely disabled him, never having been able to walk, talk or communicate in any way. He is often lethargic from the medications taken due to his epileptic seizures. He is also now fed via feeding tube, and he requires 24 hour care.

The financial burden to this family, which also includes a younger daughter, have been great. One for the Kids has chosen to assist them this year, as they have for many other families in previous years. This event fell in the middle of C2E2, which obviously posed some difficulty with pooling members. Thankfully, it was a small request. Four of us left the con early, car pooled from there (heading back to crash afterwards).

For the troop, we were able to meet the Cerney’s early in the evening, posing for a few pictures with the family, and the kids individually. Even though Gavin may not have the ability to communicate, I was able to tell that he was excited to see us. He may not have had any idea what we were, but we still looked really cool. His sister, Gemma, kept coming up to us repeatedly during our time there; she was fun, and really receptive to us.

Most of this crowd did not know much of Star Wars, but everyone still thought we were pretty darn cool, and wanted pictures with us. Those who did know really got a kick out of us being there, and thanked us. Many smiles to be had this evening. Our contact through One for the Kids was very appreciative of our coming out. I’m fairly confident that we shall be asked to return. 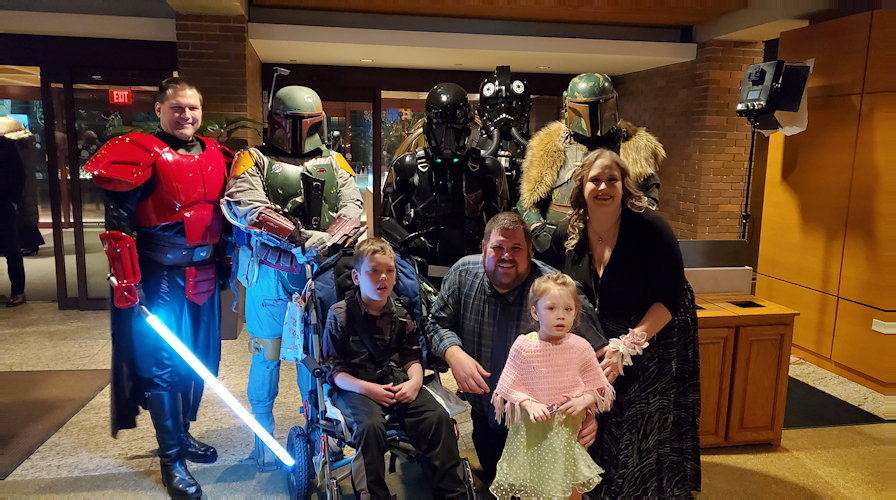